The new reality brought by the Coronavirus continues to rattle markets as the Dow and S&P continue to oscillate heavily. Apart from the rising number of infections there is little to report on the virus itself, but responses to containing it are evolving rapidly.

California Governor Gavin Newsom issued a statewide Shelter-In-Place order Thursday evening. New York followed with a similar statewide order on Friday and on Monday Maryland and the District of Columbia followed suit. All non-essential workers have been ordered to stay home and people are encouraged to leave their homes only for emergencies and required supplies. If these three states and the District were a sovereign nation, it would be the world’s third largest economy ahead of Japan and behind China. The economic impact of these orders is large and it’s difficult to chart or predict the outcome. Nevertheless, firms are doing their best to quantify the slowdown. 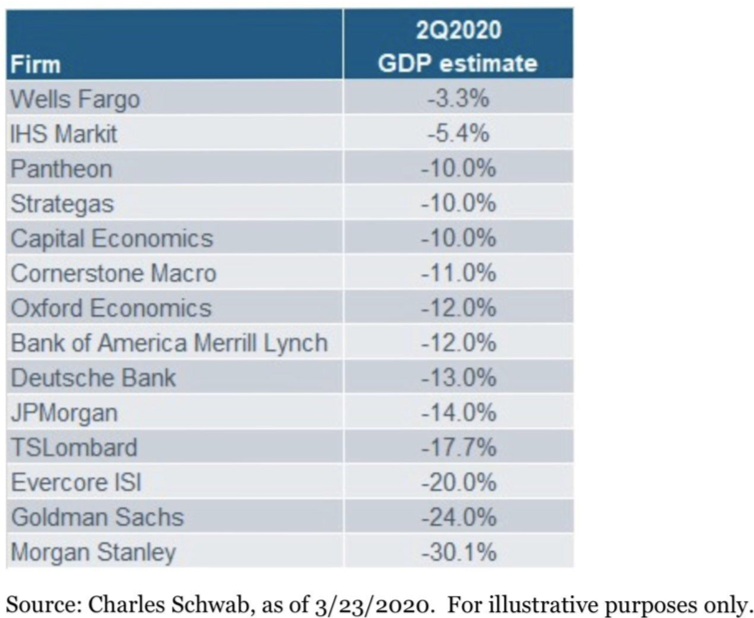 The disparity between the most bullish and bearish estimates is a whopping 27%. Analysts just don’t know what to predict or how to predict it and this is leading to extreme volatility.

The Trump administration has pushed back both the tax filing deadline and tax payment deadline to July 15th, as well as implemented a sixty-day waiver on all student loan interest. Senate Republicans formally rolled out a $1 trillion dollar stimulus package Thursday evening. Democrats blocked the bill on Sunday citing several issues, chief among them being safeguards to ensure that aid to businesses will be used primarily for the benefit of workers. Congress has provided a new self-imposed deadline of Friday, 3/27 to get this done.

Meanwhile, the Fed is embarking on its most ambitious stimulus measures in history. It will purchase $75 billion of treasuries and $50 billion of mortgage-backed securities (MBS) every day this week. This stimulus is larger than all of the Quantitative Easing Round 2 (QE2), which spanned seven months following the Great Recession. It has said it will do “whatever it takes” to stabilize financial markets, which has been interpreted as unlimited stimulus. When the $375 billion of purchases that started last week is added to the purchases that will be made this week, the Fed will have injected just over $1 trillion into the economy in the space of just two weeks! The Fed is stepping up with big and decisive moves, and this may help explain why:

Oil had its best day ever last Thursday but still finished the week down. Its outlook for the year still looks poor while the price war between Saudi and Russia rages. If current trends persist, the US could run out of physical storage capacity by mid-2020. With nowhere to store barrels, supply chains would be backed and disrupted at every level. The last major oil downturn occurred four years ago. During that time, we briefly saw North Dakota sour crude hit negative $0.50 a barrel. If supply has nowhere to go it’s possible that we see producers pay to have inventory taken off their hands. The realization of this has led oil futures to their most volatile levels inWe’re in the middle of one of the sharpest contractions on record. The market is likely to get worse absent any intervention. The Fed is making waves to help ensure that doesn’t happen. Between the funds rate going to the zero-bound, the expansion of the balance sheet and the 15 announcements, the Fed has done more in the past month than it did in the entire first year of the Global Financial Crisis.

history. The resolution of the price war isn’t clear, and all political capital is currently focused on the Coronavirus. We believe the US is likely to apply political pressure to Saudi and/or Russia if a resolution isn’t found quickly. US producers can only survive for so long.

Despite all of this, we expect markets to stabilize based on the above Fed actions and the passage of a fiscal stimulus bill. Markets should get a bit of a lift, but as we noted last week this is probably temporary. Most bear markets see a retest of the bottom before they truly start to get better. What’s the best thing to do given all of this? 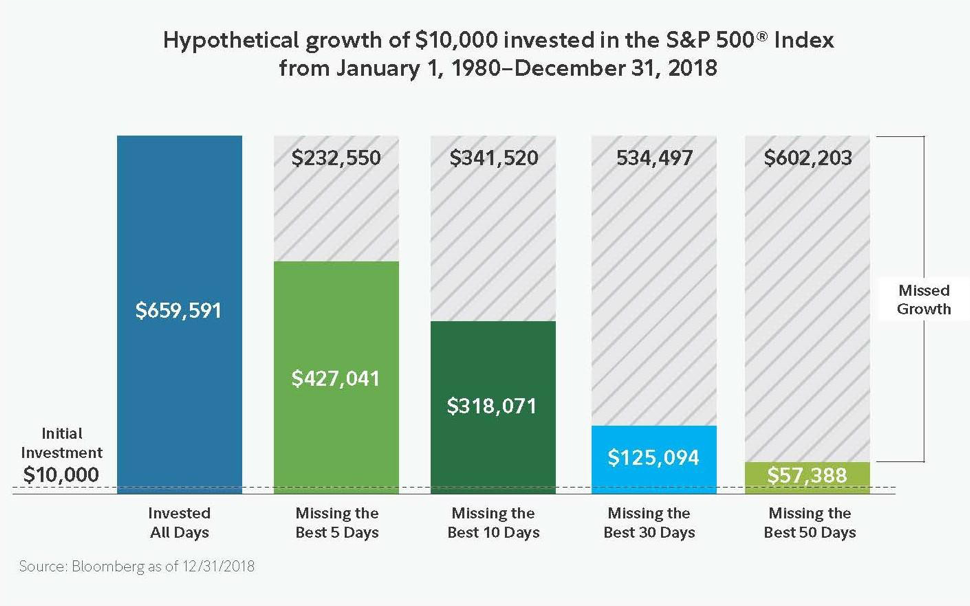 Today the Dow rallied over 11% and the S&P rallied over 9%, making it the best day since 1933. We’re still in bear market territory and the temptation to sell equities is high but doing so misses days like today. The bear market will work itself out as workers return to their jobs and the economy gets back on track. We’re going to have to ride it out, but things will ultimately improve in time. As always, we’re here for you if you’d like to talk it through.