Equity markets rallied last week in a way we haven’t seen since April. The S&P 500, Dow, and NASDAQ indexes were up 7.35%, 7.12%, and 8.98% respectively over just the last five days. Not only is this an incredible run, but it happened during the week of a historically close presidential election. Although numerous news outlets have now called the election for Biden, there is still no officially declared winner. Uncertainty is typically the enemy of growth. Here’s what happened.

Markets are pricing in former Vice President Joe Biden as the winner of the 2020 presidential election. Democrats maintained their majority in the House while it looks like the Senate will retain its Republican majority.  If this holds, come January there will be a divided Congress and Democratic administration. Gridlock is expected. It’s doubtful that major legislation will pass, which will lead to a “business as usual” environment. Businesses tend not to like the uncertainty created by change, and for now it looks certain that nothing will change.

History doesn’t necessarily repeat, but it does rhyme. Democratic administrations with a divided Congress generated the best market returns of any possible Executive/Legislative composition historically. If the trend holds, we could be in for a few more solid years of market performance. 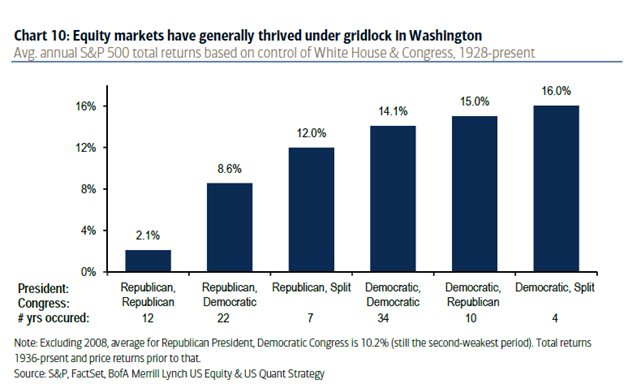 Beyond the politics of the moment, equity markets were also served with some good data last week. The economy added 638,000 jobs last month while the unemployment rate fell to 6.9 percent. Both of these metrics beat expectations, but the economy still has a long way to go. Another 10m jobs need to be added to get back to our earlier February high. 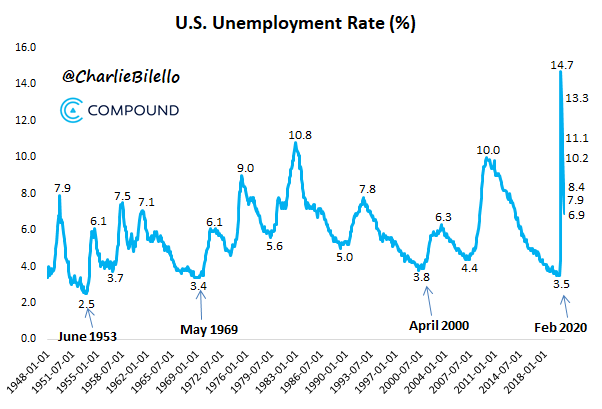 Other areas of the market are reacting to possible policy changes that could be brought about by a Biden administration. The iShares Core MSCI Emerging Market ETF (IEMG) just experienced its biggest monthly inflow since December 2019 as a softer approach to trade may be at hand. Meanwhile, the Invesco Solar ETF (TAN) climbed roughly 10% in the last week alone as Biden is expected to be more favorable to renewable energy than President Trump. Run ups in these areas reflect sector bets and are notoriously fickle. A business as usual scenario suggests that some of these gains will be pared down when substantive change fails to materialize. 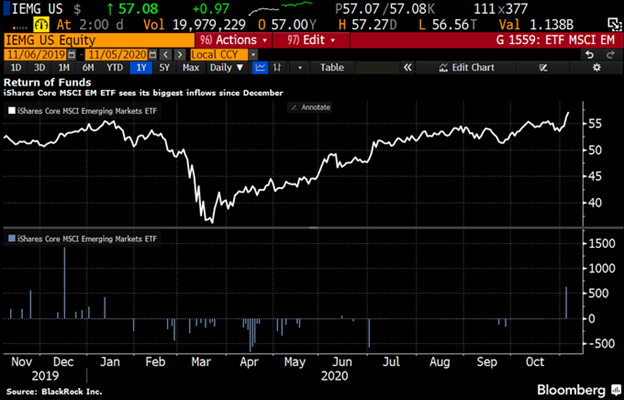 Politics aside, this is a celebrated week in the markets. Optimism is flourishing but there are still dark clouds on the horizon. Last Wednesday, America passed yet another grim milestone in its battle against COVID 19. John Hopkins reported over 100,000 new daily cases. Hospital systems are fraying in pockets of the country as capacity fills up and beds run short. Many countries in Europe are reinstating lockdowns and mobility restrictions as a second wave of COVID takes hold. The US may not be far behind. The announcement today from Pfizer that their vaccine is highly effective against COVID 19 is welcome news, but it won’t be available soon enough to counter the immediacy of the surge in infections.

We still have a long way to go despite the awesome performance of equity markets this week. As we’ve stressed before, nothing truly gets better until we have a solution for our current public health crisis. The recovery will be gradual, choppy, and unforgiving. Be vigilant and stay patient.